Writer Lucy Ellmann shares her 'Top 10 gripes in literature' in The Guardian.

4. Jane Eyre by Charlotte Brontë
Driven to distraction by Rochester’s cavorting with a gold-digger and dressing up in drag as a fortune teller, Jane finally erupts. “Do you think I am an automaton? – a machine without feelings? … Do you think, because I am poor, obscure, plain, and little, I am soulless and heartless? You think wrong! – I have as much soul as you – and full as much heart!” Like Sojourner Truth’s real-life speech a few years after the novel was written, Ain’t I a woman? Brontë’s fervid feminist statement refutes the Victorian gridlock imposed on womanhood. But after Jane and Rochester retreat triumphantly indoors, lightning blights the tree they were just sitting under: you can’t make an omelette without cracking eggs.

Northern Life announces a couple of forthcoming events in Haworth:

Sat 25th [September]
The Brontë Interactive Ghost Walk
Haworth, West Yorkshire. Join Haunting Nights as they take you back in time at this historic village in Yorkshire. The Black Bull is known to be one of most haunted inns in the UK. This 300-year-old public house was Patrick Branwell Brontë’s (brother of Charlotte, Emily & Anne Brontë) favourite place to drink. The Kings Arms Haworth Built on three storeys of local millstone grit, it is a typical, dark Yorkshire building from the early 18th century. Over the years, there have been consistent reports of at least three different men dressed in black Victorian style suits haunting the Kings Arms. 7.30pm £10 allevents.in [...]
Fri 8th [October]
Haworth Steampunk Weekend 2021
Main Street, Haworth. You will see Steampunk, Victorian and Edwardian fashion. Steampunk vehicles, dancers, tea duelling, best dressed, steampunk accessories and Steampunk traders. Steampunks gather to socialise, shop and be enter-tained whilst taking in the lovely atmosphere and the pretty surroundings. This is an annual charity event for Sue Ryder Manorlands Hospice. Bronteadventures.co.uk (Yazmin Cawood) 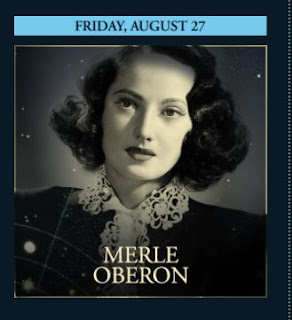 She was born Estelle Merle O'Brien Thompson, but we all remember her as Merle Oberon and today, August 27, she is the star of the day on TCM's Summer Under the Stars:

Oberon returned to England for her most famous screen assignment as Cathy Earnshaw in William Wyler's lush adaptation of Emily Brontë's "W
uthering Heights" (1939) - the most beloved film adaptation of the tragic novel. But while the finished film went over very well with critics and the public, the production was a less than happy experience. Co-star Laurence Olivier's relationship with the actress on-set was soured by his disappointment over Oberon being chosen for the part instead of his off-screen paramour, Vivien Leigh. The pettiness and pointless bad behavior that ensued from Olivier, fortunately, did not come across in the leads' performances and they display wonderful romantic chemistry, making "Wuthering Heights" the penultimate romantic tragedy.